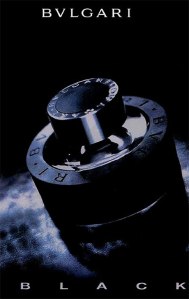 A few months ago, I dismissed Bvlgari Black with the words,

Inside that strange little hockey puck of a bottle is probably the most interesting mainstream fragrance on the market today. Pure intellectualism, however, does not a great perfume make: above all, perfume has to smell good. Black succeeds on both counts. If I had given that rubber note a few minutes, I would have found that it softens into sexy, smoky leather underscored by soft vanilla. In a time when the legendary leather scents (Bandit, Tabac Blond, etc) are being reformulated, Black is an extremely welcome addition to the category.

Black reminds me of the “cool girls” in high school. Not the popular girls, the ones on the cheerleading squad, but those worldly ladies with older boyfriends who picked them up in flashy cars. Black is a cologne, and therefore unisex, although I can’t imagine any of the men in my life wearing such a daring scent. It would, however, be perfect for the man who inspired this review: Spike from Buffy the Vampire Slayer. With that scar over his eyebrow and his charismatic swagger (not to mention his motorcycle and leather duster), Spike was the ultimate bad boy. Black wouldn’t be half bad on Buffy, either.

Isn’t he the most perfect thing you’ve ever seen? Whenever I watch Buffy, I find myself screaming, “Buffy, you fool, the hottest vampire in Sunnydale is in love with you, so move the hell on from Angel, because he has his own spinoff now and is NEVER COMING BACK, except for like 5 minutes at the end of Season 7.” Then I remember that the little people in the TV cannot actually hear me. Incidentally, this little habit is the reason that everyone but my most loyal friends refuses to watch Gossip Girl with me.

Disclaimer: I own a bottle of Black, which I purchased from Sephora.