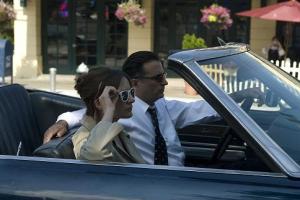 My parents and I saw City Island night. It was a great movie, very funny (lovers of Jersey Shore will take to it immediately). From the very start, I was drawn to Molly, the lovely Emily Mortimer’s character. She seemed so familiar, but I just couldn’t put my finger on it. Black liquid eyeliner, trench coat, oversize sunglasses… left her husband and three children to become an actress in New York, where she adopted a vaguely British accent… name that rhymes with “Holly”… of course, of course. Molly was a pitch-perfect portrayal of a phenomenon I like to call “Holly Golightly Girls.”

Your average Holly Golightly Girl is easy to identify. She smokes too much. She wears cat-eye eyeliner and little black dresses that look divine on her slender figure. She’s as effervescent as champagne bubbles, sparkling with charm and wit. This vivacity is always accompanied by an undercurrent of wistful vulnerability. Holly Golightly Girls flirt with everyone, and as a result generally have few female friends. Occasionally they’ll throw out lines- “We don’t belong to each other”, or something about the mean reds- that only someone who’s watched Breakfast at Tiffany’s over and over would pick up on.

That someone, of course, would be me. I know every line, every outfit, every graceful gesture. I can tell you what drink Holly orders in the nightclub scene, or the contents of her refrigerator (milk, champagne, pink ballet slippers). If I lived in New York, I would undoubtedly walk up and down Fifth Avenue at 6 in the morning. Yet I do not count myself among the ranks of the HGGs. HGGs adopt Holly’s mannerisms, but they fail to grasp the deeper meaning. They adopt her vulnerability, but they have no understanding of how precarious her position really was.

It is often suggested that Holly’s character was intended to be a prostitute. Holly’s belief that love was a means to an end rather than an all-consuming goal would have been considered so unseemly in a woman that this interpretation is unsurprising. However, Breakfast at Tiffany’s author Truman Capote refuted this claim in a 1968 Playboy interview, explaining that Holly “was the prototype of today’s liberated female”. Despite her questionable gold-digging ways, Holly was ultimately a woman attempting to be independent at a time when men expected total ownership over women.

Breakfast at Tiffany’s opens with a man banging on Holly’s door, yelling about how he paid for her friends’ dinner. “Now, doesn’t that give me some rights?” Holly certainly doesn’t think so. Later in the film, she counters Paul Varjak’s grossly entitled “I love you, you belong to me!” with “I’ll never let anybody put me in a cage”. Holly Golightly Girls, with their fixation on Holly’s appearance and style, miss the point entirely. Eyeliner isn’t what makes Holly fabulous. Her bravery in going against cultural norms, that’s what I wish these girls would want to emulate.

Holly’s perfume choices reflect her desire to be liberated from traditional gender roles. Rather than Chanel No 5 or Jean Patou Joy, two of the most popular feminine fragrances at the time, Holly wears 4711, a men’s cologne. Perfume is usually portrayed as a tool to allure and entice men (although we perfumistas know this is rarely the case). Holly’s preference for a men’s cologne suggests that appealing to men was not her goal. That a woman’s goal, in 1943, could be something other than pleasing men, that’s something special indeed.

Oh, and just in case you’re wondering, I loathe the movie ending. Hate it, hate it, hate it. Paul’s all “How dare you refuse to submit to my attempts to control you! You’ll never find love because you’re too much of a free spirit! You’re in a glass case of emotion… OF YOUR OWN DOING!” 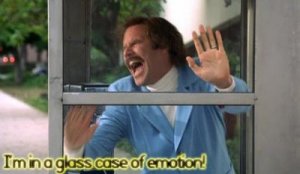 So of course Holly’s all “Even though I have never once given any indication that I think of you as anything more than a friend, I’m totally going to go along with this, thus negating my entire character development. Let’s make out in the rain!!!” 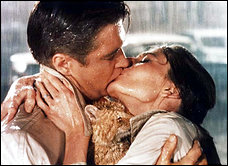 I must admit, I’ve never tried 4711. If you have, do you think it suits Holly? Which perfume would you imagine her in?