So recently I was watching Breakfast at Tiffany’s, as I am wont to do. It’s hard to imagine now, as Audrey Hepburn has become almost interchangeable with the character Holly Golightly, but the role of Holly was originally intended for Marilyn Monroe. Breakfast at Tiffany’s author Truman Capote stated that “Marilyn was always my first choice to play… Holly Golightly”, and instructed the screenwriter to “tailor the screenplay for Monroe.”

Unlike Paramount’s casting choices, the screenwriter apparently respected Capote’s wishes; the parallels between Holly and Marilyn are as clear as day. So why did Paramount choose Audrey over Marilyn? It’s easy enough to argue that Audrey was an Oscar-winning actress, while Marilyn was mostly known for her portrayal of dumb blondes. I suspect, however, that the true reason was something far more superficial.

With her little black dresses and Tiffany’s pearls, Holly is presented as the last word in style and elegance. If the fashion industry, with its insistence on models who resemble nothing so much as coat-hangers, has taught us anything, it is this: a curvaceous, womanly physique, like Marilyn’s, is inherently unfashionable. A woman with curves is automatically seen as trashier, sluttier, less intelligent, less serious than her more slender counterpart. Case in point: Audrey projected such gravitas that Anne Frank’s father asked her to play Anne in the movie adaption of her diary. In contrast, Marilyn continued to be cast as the breathy sex kitten until her death, a year after Breakfast at Tiffany’s was released.

I believe that this concept, that skinny = fashionable, can also be found in current perfumery trends. When was the last time a mainstream perfume house brought out a robust, full-bodied perfume? Everything today is streamlined, minimalist, and, well, thin. The voluptuous perfumes of days past are now disparagingly referred to as “old lady” perfumes. A few examples: Chanel Eau Premiere, a lighter version of the more robust Chanel No 5, has been extremely successful. The airy Dolce & Gabbana Light Blue has been a best-seller for years. The recent Issey Miyake A Scent was “inspired by pure fresh air”.

Perhaps most tellingly, the famous torso bottle of Jean Paul Gaultier Classique is based on the bottle for Schiaparelli Shocking, which in turn was based on Mae West’s body. However, the Classique bottle is considerably slimmer than the original Shocking. 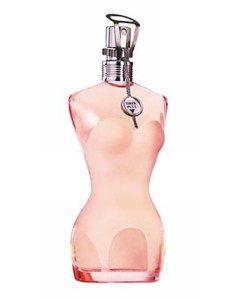 11 thoughts on “Through Thick and Thin”