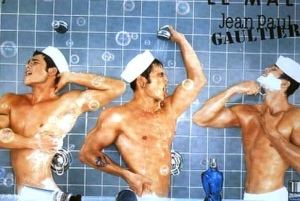 Jean Paul Gaultier, you naughty bit of crumpet, I delight in your cheeky antics. I applaud your judicious use of the juicy Crystal Renn for your modeling campaigns, and I am tickled by the sheer audacity of your fragrance, Le Male. From the torso bottle, which sports a package to rival David Bowie’s in Labyrinth, to the pretty-boy sailors in the ads, has there ever been such an openly homoerotic fragrance? Only the bravest, least heteronormative straight man would be caught dead in Le Male, and even then he’d probably hide the bottle.

I still can’t believe this is a children’s movie.

For many years I held off on Le Male, convinced that its flamboyant outer trappings must be a distraction from what was no doubt a boring, conventional cologne. I am pleased and humbled to report that Le Male is exactly as odd as I could have hoped for. Le Male is a terrifically (some would say sickeningly) sweet lavender fragrance. It reminds me of an unusual Nigella Lawson delicacy, lavender cupcakes. 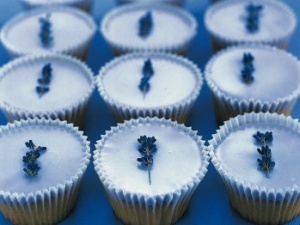 The lavender mostly fades after about an hour, leaving a standard musky base. Personally, I would not wear this- despite all that sweetness, Le Male is not particularly feminine- but I appreciate JPG’s daring in pushing the limits of masculine fragrances.