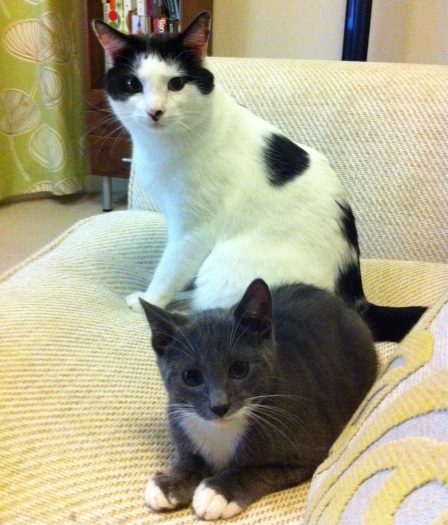 I can’t say enough good things about Thomas of The Candy Perfume Boy and Fragrant Reviews. I think of him as something of a perfume lion tamer; he adores the boldest, loudest fragrances. His reviews have the power to make any perfume, even one that I already know I do not like, sound utterly divine and absolutely necessary. Today he’ll provide us with baseless speculation about the perfume community’s most famous (and most likely only) kitten couple, Paddington and Zelda.

Why do you write about perfume?

The million dollar question! I guess I write about perfume because it fascinates me, I get so much pleasure from sitting down with my box of samples and allowing the perfumes to take me places that I would never expect or have the chance to go. I have always sampled and made notes on perfumes but it wasn’t until Nick invited me to be a part of @fragrantreviews that I started putting my thoughts into something more coherent. The experience I gained with @fragrantreviews gave me confidence (it’s not easy doing 140 character reviews at times) in my writing and helped me develop a writing style that fits with what I want to do, which in turn helped me create The Candy Perfume Boy.

Your passion for Thierry Mugler fragrances is well-documented on The Candy Perfume Boy. How did this love affair begin? What is it about the Thierry Mugler line that makes it so special?

I do love me some Mugler, it is true! I remember trying Angel for the first time, it was right at the beginning when I was just starting to get into fragrance. I had read lots of polarising views on Basenotes and felt I needed to give it a try, and when I did I was absolutely disgusted. Despite my initial disgust there was something intriguing about Angel and I kept coming back to it and then my Mugler love snowballed from there. I truly believe that in terms of creativity, quality and cohesion, Mugler is one of the best lines available.

What are your favourite perfume houses?

I do love Mugler as we’ve already mentioned, but also love Guerlain (how can you not), Editions de Parfums Frederic Malle (seriously good fumes) and Etat Libre d’Orange because, despite all of the weird, overtly sexual hype they have a solid line of well-made and thought provoking fragrances. I’m also starting to develop major crushes on Amouage and By Kilian, there seems to be a good few fragrances in both houses that I would happily add to my collection.

What is your favourite place to shop for perfume?

If I want to do some serious perfume shopping I have to go to London. My usual haunts in London are Harrods, Selfridges, Harvey Nichols, Liberty and Les Senteurs. The good thing about London is that there is a huge variety of stuff available and it’s not all in once place, I like the fact that I have to go to different stores to try different lines. I love the boutique vibe of Les Senteurs and they have a great selection, I can also go and hassle Nick when I go there, which is always fun.

It’s been rumoured (mostly by me) that your new kitten Paddington is the long-distance lover of my Zelda Weinberg-Rosenberg. Can you confirm this?

I am not in a position to confirm nor deny this, Paddington is keeping his cards close to his chest, however a picture of Zelda was found near his kitty bed and he does seem to blush at the sheer mention of her name…

What are some of your other interests outside of perfume?

I am quite into film, I like all sorts, from World Cinema to massive huge (and crap) Blockbusters such as Transformers 4. I also really like to read, but due to my short attention span I don’t ever seem to finish one book before starting another. At the moment I have The Emperor of Scent, Perfume: The Alchemy of Scent, Terry Pratchett’s Equal Rites and The Lord of The Rings (an ongoing mission) on the go.

Tea is also a big thing for me, I have an Earl Grey habit that I have no intention of kicking. Right now I’m obsessed with Twining’s Lavender Earl Grey and The London Tea Company’s Vanilla Chai but I do like to try all sorts of tea.

What perfumes are you hoping to find under the Christmas tree/Menorah branches this year?

I am hoping that Santa will bring me two bottles this Christmas; Amouage Gold Woman and By Kilian A Taste of Heaven. There are more things on my wish list but these are the two that I am desperate for. I have been very good this year so Santa should expect a strongly worded letter if he does not deliver.

6 thoughts on “Perfume Blogger Interview with Thomas of “The Candy Perfume Boy”!”