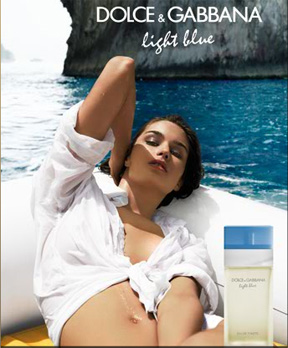 Like it or not, D & G Light Blue is a modern perfume classic by now. It’s been a best-seller for over ten years, which is freaking ancient in perfume years (perfume years are like accelerated dog years). My feelings on Light Blue were effectively summed up by a Hopkins senior who declared, “I love it! But I think it’s sort of too common now.” Light Blue is indeed ubiquitous. It is the third most-reviewed fragrance on MakeupAlley, with 1,245 reviews. But while Light Blue may be a common choice, there’s nothing common about the scent itself.

Despite the name, Light Blue is not particularly light. It has the same surprisingly opaque effect as the frosted glass on its hideous bottle. Light Blue is a dense, powdery citrus fragrance that subtly hints at apple (unlike perfumes like DKNY Be Delicious, which scream “APPLE APPLE APPLE APPLE BOTTOM JEANS BOOTS WITH THE FUR”).

There is something bizarrely peaty in the dry down. I don’t know how, but this combination of apples and earthiness somehow works. What is the secret to Light Blue’s success? It’s certainly not the bottle, which looks like a brick from a very ugly house. It’s not the relatively unexceptional marketing. For once, we have a perfume  that succeeded because of what was inside of the bottle. And for that, I wish Light Blue many more years on the bestseller’s list.