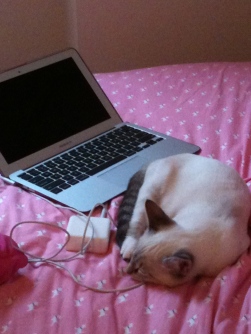 It has recently come to my attention that perfume criticism is evolving beyond a merely written medium! Perfume lovers are now posting video reviews on YouTube, which I had previously pretty much only visited to watch clips of kittens playing with Roombas, llamas, and/or dolphins. Are video reviews as effective as written reviews when talking about perfume, or are they a gimmick best left to makeup bloggers? In the name of research, I watched perhaps 50 YouTube perfume reviews, including at least three 24-minute soliloquies by grown-ass women with usernames like *~*sexiibarbiidoll82*~* or teamjacob4lyyfee. I did it for you, y’all. I did it for you. Here are my findings.

And now, the question you’ve all been waiting for: will Scents of Self be joining the ranks of video perfume reviewers? The answer is no, for two reasons. First, I have an odd, flat voice that is frankly unpleasant to listen to. My voice could not be less suited to video. Second, I am a very literary person. I love to read and write. I love perfume, but I really love reading. My favorite part about being involved in the world of perfume blogging is that it provides me with so much wonderful reading material. I don’t want to make videos; I want to write! However, in the spirit of understanding, I present my one and only attempt at a video perfume review. As it turns out, it is a good thing that I am not particularly interested in making video reviews, because I am not very good at them.