Saturday, April 14th: After three months of relentless hazing (and by “relentless hazing”, I mean “being given a lifetime supply of candy and t-shirts”), it’s Initiation Day for our Pi Phi new members! But first, Drew and I must procure a bow tie for Monday’s “Pi Phis and Bow Ties”-themed date party. We try our luck in Hampden, a kitschy little town made famous by delightfully creepy director John Waters and his movies “Pecker” and “Hairspray”. We quickly find a perfectly respectable clip-on bow tie for $10 (and some Scooby Doo slippers for only $6! My Invader Zim slippers were getting lonely).

With the bow tie out of the way, we can finally turn our attention to some far more important business: perfume shopping!

Our first stop is Kiss N’ Make-Up, a cute beauty store that claimed to carry the CB I Hate Perfume line on their website. They no longer had it (or any perfume, unfortunately), but they did have a gorgeous cat, Mrs. Puff, who guards the store entrance. If I had to guess, I’d say she’s a Maine Coon, don’t you think?

We have far better luck at a boutique called In Watermelon Sugar, which has the Tokyo Milk line! I’m won’t lie to you, I had a bit of a spaz when I saw them. I’ve always been curious about the Tokyo Milks, which are reputed to be creative perfumes at amazing prices. I thought that I would be all about the sweeter perfumes, like Dead Sexy or Let Them Eat Cake, but I somehow ended up falling for Gin & Rosewater. I don’t like gin or rosewater, but Gin & Rosewater smells like the most delectable gourmet rose-flavored soda. A new perfume and Scooby Doo slippers for only $36? I declare this shopping expedition a smashing success.

We head home just in time for my Initiation shift. I can’t tell you anything about the double-secret-probation ceremony itself, except that it involves white robes which were clearly intended for taller ladies. But I will tell you that I wore Cartier Baiser Vole. I thought that its fresh lily scent would be a good match for the ceremony (sorority ceremonies are all about purity and faux virginity).

After the ceremony was finished, our newly initiated members received YET ANOTHER ROUND of ruthless hazing (and by “ruthless hazing”, I once again mean “so much candy”). For this after-party, I switched to the more exuberant Gin & Rosewater. It just puts me in such a good mood! Now, it took us about an hour to set up these beautiful candy designs. 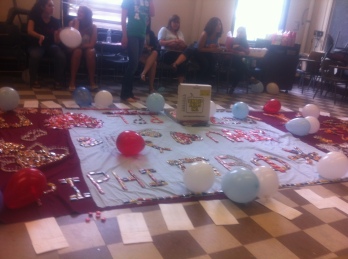 It took those savages all of thirty seconds to demolish it.

Afterwards, our newly initiated members passed around a cookie cake (and some chocolate-covered matzah, for the more observant of us) and shared their favorite part about joining Pi Phi. There might have been some muffled sobbing from my corner of the room. People always tell me, “You don’t seem like a sorority girl”. They’re right, of course, and if I were at any other school, I probably wouldn’t be one. But Hopkins can be an awfully isolating place. Most nights I do opt to stay in and watch Firefly with the kitteh, but it makes me feel so much better to know that if I ever do decide not to be so anti-social, there are a hundred girls who I could call.

Sunday, April 15th: This was a much-needed low key day. I had the most gloriously bubbly bath courtesy of a Lush French Kiss bubble bar. Did some reading on herpesviruses for Virology class (trust me, herpes is not as glamorous as the lame-stream media would have you believe), beat a gym leader or two in Pokemon SoulSilver. My SOTD was A Lab on Fire What We Do In Paris Is Secret, the perfect cuddly rice scent. It really does smell just like a sweeter version of the steam that comes out when you open a rice cooker. This is what Kenzo Amour should have been. I was all set to order a $32 bottle from Anthropologie when I made the incredibly dumb mistake of asking Drew what he thought of it. He didn’t like it. All of the heliotrope reminded him too much of almonds, to which he is allergic. Grumble grumble grumble. Why did I ever allow him to develop preferences?

In the absence of rice-scented perfume, I demanded fried rice for dinner. We go out for what will most likely be our last hibachi dinner in Baltimore (Drew is graduating in May). The nomz, they are bittersweet. 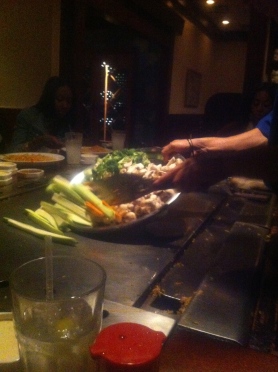 Monday, April 16th: On Mondays I have my favorite class of the semester: Women in Hollywood! Today we watched “Light the Red Lanterns”, a film about Chinese concubines in the 1920’s. You do not want to be a Chinese concubine in the 1920’s, y’all. I do like the movies, but the real reason that it’s my favorite is because the pleasingly eccentric professor brings her dog in to class. She’s a very cute dog, and remarkably well-behaved (far more so than Zelda). 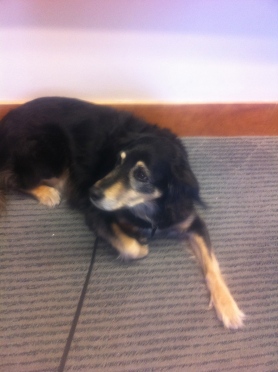 I decide on the roasted sweetness of Serge Lutens Un Bois Vanille to match the gold dress that I’m wearing to the date party. Drew shows up looking terribly dapper in his clip-on bow tie. To my delight, he’s wafting the Atelier Cologne Vanille Insensee that I bought him for his birthday. We were by far the best-smelling couple at that date party. 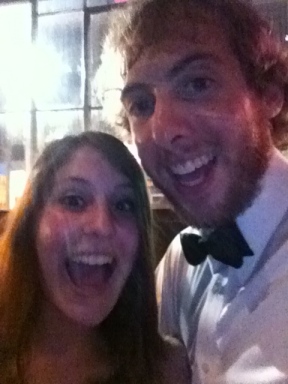