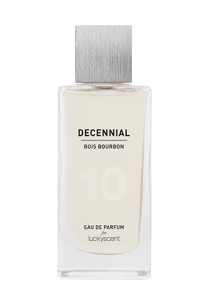 I’m not much of a bourbon drinker. I reserve my affection for gin, which makes me giggle and buy terrible poetry books. But Bois Bourbon is everything I could ask for in a perfume: a prominent saffron note, a sweet veil of heliotrope, a seamless cedar note, and a charming backstory (Luckyscent dedicates Bois Bourbon to Philip Marlowe, the wisecracking protagonist of Raymond Chandler’s electric The Big Sleep). I wonder if they’re thinking of the movie Marlowe, a glowering Humphrey Bogart who achieves Captain Kirk-like levels of macking on the ladies, or the ferociously bitter book version.

While Bois Bourbon is obviously much more nuanced than your average glass of the brown stuff, it absolutely does evoke bourbon in a literal sense, so this isn’t for anyone who doesn’t enjoy boozy perfumes. Lys du Desert is undoubtedly going to get the most attention out of the Decennial collection, being the only Andy Tauer creation, but I hope that Bois Bourbon isn’t overlooked entirely. It’s the most wearable of the four scents, and awfully attractive.